Happiness By Age: Stay Away From 35-60 Year Olds

High school was stressful because I knew so much of my future was riding on getting good grades and SAT scores. Combine academic pressure with athletic demands and peer pressure to be “cool,” I wonder why more kids don’t fall into the deep end, especially with absentee parents working all the time.

College was pretty exhilarating due to all the sudden freedom. Food was plentiful and the parties outrageously fun. Being able to date so many people was a blast. Oh yeah, and learning new subjects was a nice benefit too. The only real pressure came from the expectation of finding a good job. Spending four years of time and lots of money only to end up with nothing would be a great disappointment.

The relief of actually getting a full-time job catapulted my happiness to a 9. But the happiness didn’t last due to the 70+ hour work weeks. Getting in before sunrise and leaving after sunset got depressing after a while. My happiness tumbled to a 6 when I realized all my work in college had led to one big endless grind.

Even a generous promotion at age 27 only made me a 9 level happy for a couple months. Then it was back to being a whipping boy for clients and playing corporate politics. By 2011, my happiness again dropped to a 6. The financial crisis had taken its toll and I was tired of doing the same crap.

It was in October 2011 while drinking an overpriced Mythos beer at the top of Santorini, Greece that my happiness rocketed to a 10. I was overlooking the crater on a sunny 78 degree day and had just earned $1,200 via Paypal from an advertising client in the span of 30 minutes. It wasn’t the money that made me happy, it was the realization that I found a way out of prison.

Then Happiness Came Tumbling Down

Ever since I engineered my layoff in 2012 at the age of 34, my happiness level has stayed between 7-8, with only brief moments of 9-10. I attribute my happiness to an incredible wife, the growth of Financial Samurai, good health, and a bull market. But one day my happiness took a tumble, and it stayed around a 5 for about three weeks.

During these three weeks, I experienced tremendous lower back pain – pain I hadn’t suffered in over 15 years. Online, I was being judged by non-parents regarding my insurance plan for my son’s future. Offline, I was tired because I stubbornly kept a rigorous posting schedule despite now being a full-time dad between 8am – 10pm every day since birth. Heck, even in the United States working parents get 1-3 months of parental leave.

As any rational person would do, I began researching whether something was wrong with me. Here are some interesting charts on happiness and age I found. Can you see any patterns? 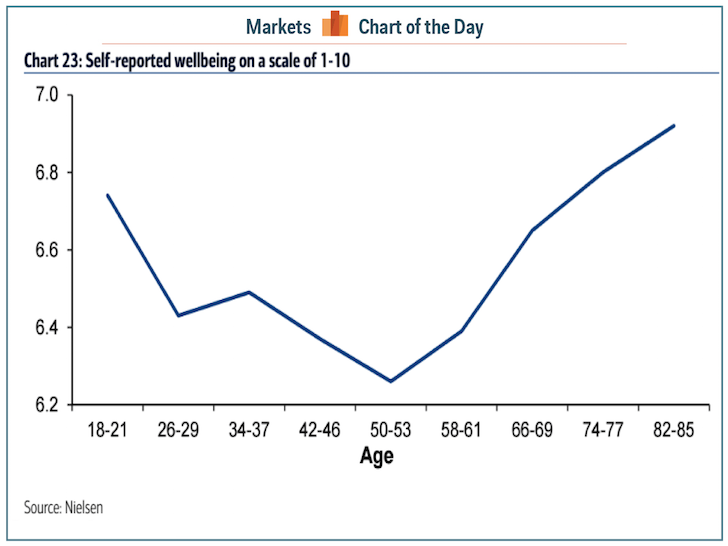 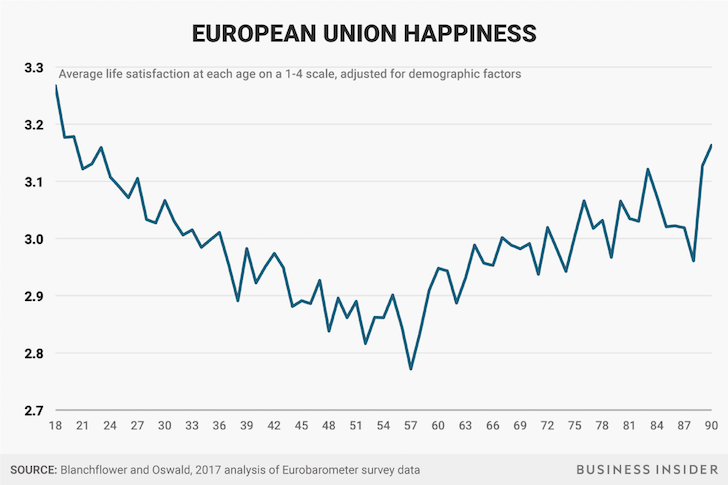 Well what do you know. At the age of 40, I’m in the beginning stages of “the trough of unhappiness.” In America, we experience a dip in happiness between the ages of 35 – 60. Even in the European Union, where many of the happiest countries in the world are located, there’s a trough of happiness between 35 – 60. If you can live past 60, the good thing is that happiness generally improves until death.

The only country where you don’t want to live is Russia, where from birth happiness is on a continuous decline! No wonder why the Russians meddled with the election and now control American politics. They wanted out of the motherland after realizing how good we’ve got it.

What Happens Between The Age Of 35 – 60 To Cause Unhappiness?

You would think that being financially independent at 40, owning a sustainable lifestyle business, receiving regular positive feedback from readers, and having a family would give me maximum happiness. But it has not due to three main reasons:

1) Hedonic adaptation. The beautiful thing about the human spirit is that even in dire situations, we have the ability to keep hope alive. At the same time, even if you have every thing you want, the happiness boost never lasts long. We always revert back to our steady state of happiness over the long term.

Think about all the good things that have happened to you: getting into college, getting a job, getting a promotion, getting a raise, finding a partner, finally feeling rich, buying your dream home, having a baby, making a best friend etc. Each event might give you a 1 or 2 point boost, but sooner or later, the boost will fade as responsibility kicks in. It’s kind of sad really. 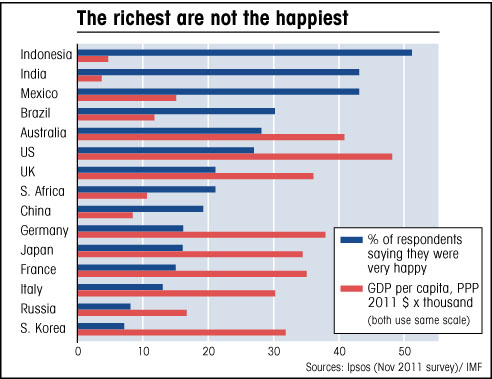 2) Sandwiched in the middle. As a new father, I feel the strains of taking care of my little one. His mom and I are his guardian, physical therapist, educator, and caretaker all-in-one. At the same time, our parents are over 70, and they can no longer walk, climb stairs, drive, remember, and think as they once did. Folks between the age of 35 – 60 are dealing with the responsibility of caring for two generations, while usually also managing their careers. Financial strain may come into play due to the cost of healthcare, day care, and assisted-living care.

Our stress comes from being 5+ hours away by plane from both sets of parents. We worry about basic things like whether they’ll be able to safely maneuver the stairs without falling. It would be amazing if they all came to the Bay Area so we can check in on them every week. But they are set in their ways, so it’s up to us to move as soon as our son can become a little more independent.

3) Health. After turning 40 I suffered back pain for the first time since my 20s, sprained my left ankle playing tennis, and tore muscles in both quadriceps playing softball. What the hell? The left ankle sprain happened even though I was wearing an ankle brace. We were 2 hours, 10 minutes into a match when I went the wrong way guessing for an overhead smash. Both quads were strained because I had not properly warmed up. I hadn’t gone from a standing position to a full sprint after hitting a ball in over a decade.

Our bodies rarely keep up with our minds because most of us are no longer manual laborers. My mind is strong because I exercise it every day thanks to this site. But my body is weak because I don’t work out, don’t stretch, and only play a sport at most three times a week. Nothing is worse than being injured or sick, especially when it rarely happens.

Money Is Just One Part Of Happiness 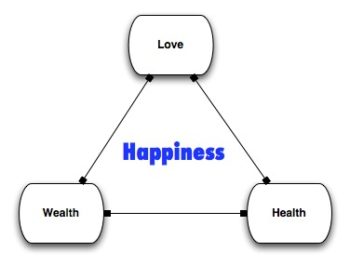 To be a truly holistic site that helps people, going forward, it’s important Financial Samurai focuses more on Relationships and Health instead of just wealth creation. After all, we can have all the money in the world and it will mean nothing if we don’t feel good and have nobody to share it with.

Let’s optimize for happiness by building incredible friendships, staying in great shape, and building passive income so we have the freedom to choose our lives.

The next time a 35 – 60 year old makes you feel bad, give them a pass, including myself. And if you want to really get a happiness boost, find some 70+ year olds to hang out with. They might even teach you a thing or two about living a wonderful life.

Readers, what is your happiness level between 1-10? When were you the happiest and least happiest in your life? For those over the age of 60, has your happiness level improved? Why do you think happiness levels improve the closer we come to death? Thanks to hedonic adaptation, I’ve recovered back to an 8. If you’re interested in audio versions, you can subscribe to my iTunes channel here.

The post Happiness By Age: Stay Away From 35-60 Year Olds appeared first on Financial Samurai.