To Get Better, Be Brutally Honest With Yourself

Posted on December 11, 2017 | Comments Off on To Get Better, Be Brutally Honest With Yourself 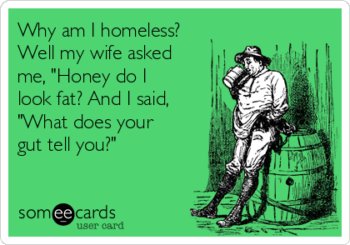 One of the downsides of putting yourself out there is that you open yourself up to misinterpretation or criticism. Fear of ridicule is one of the biggest reasons why 97% of people don’t do anything to change their life. It all starts with getting bullied at school or admonished by our teachers or parents for doing something different. Is it no wonder why we all get in line once we graduate?

For some reason, I was always the kid who fought back against bullies, no matter how big or how menacing they were. I figured, even if I got pounded to a pulp, before I did, I’d be able to at least get in one blow and it’d be worth defending my honor.

Because of my defiant behavior, I went to the principal’s office plenty of times. I was suspended from school twice for fighting and my parents were none too pleased. It didn’t matter who started the fight, if you fought back, you were equally punished. I thought this was a bullshit system, which gave me my first clues into a rigged society.

Despite the discomfort of doing something new, I’ll continue to experiment in order to grow. But sometimes, I’ve got to recognize failure by being honest. Here are a couple examples. I’d love for you to share some of your examples as well.

Honesty Is The Only Way To Get Better

After completing three audio versions, I asked for feedback in my private newsletter whether folks found it useful or useless. To my disappointment, I only got ten responses out of 20,000+ subscribers. Nine said audio versions were useful, one said it was useless. In my mind, I was thinking I’d get at least 50 responses, just like how I did when I asked for parenting tips. But I think people were too afraid to speak the truth.

So if I’m brutally honest, what does this mean? It means: 1) nobody cares about audio versions, 2) I haven’t made a strong enough connection with my newsletter readers, 3) I haven’t added enough value to my subscribers, 4) my voice hurts people’s ears, and 5) my newsletters are too long.

It’s hard to realize the truth, but the truth is the only way I can optimize my time and improve my verbal delivery. What’s the solution? Only do audio versions if I have the energy. If I do an audio version, try to speak more clearly and introduce new stories. But also realize that since nobody cares about the audio version, I should feel free to let loose and just have fun with the delivery.

2) Making people think in different ways. I enjoy reading material that leaves me thinking about a situation long after I’m done. It’s the same thing with movies like Inception or the season finale of The Sopranos. Whatever happens next is based on your interpretation.

Despite everybody saying they want the freedom to choose, I’ve found that most people simply like to be told what to do. Due to my personal preference for deeper thinking, I’ve ended up confusing many of my readers with unclear prose.

Here’s an example of one reader’s feedback from my post, How To Stop Worrying About Your Child’s Future In A Brutally Competitive World. The entire point of my post was to help parents stop worrying about their kids not getting straight A’s, not getting into a prestigious university, and not working at a coveted job that pays well.

I find it interesting that you state as fact the equivalency of a top rated University with a top rated job. Perhaps Silicon Valley is more merit based than your previous field, but after your first 3 year gig after graduating from any school your peers rate you on merit and the sky is the limit.

I worked with very good people who trained a couple years in a local college and really bad people with PHD from top rated schools.

I also believe it’s somewhat telling of American ignorance to make a statement like that. Sort of like why Americans can’t get universal health care in place. The powers that be are working hard influencing the population that “socialist” health care is bad.

It’s becoming ingrained into American Life practices that prevent upward mobility of the masses. I don’t have the legacy statistics handy but many college acceptances are handed to those who have not earned them.

I mean – Didn’t George W. go to Harvard? Doesn’t that provide an interesting data point on the quality of graduates from Top Rated schools?

My opinion is that your child needs a higher education as an pass to get into the workforce. If the industry is merit based, he needs work ethic, communication skills and a bunch of other attributes that are not taught in schools for success.

It sure sounds like he agrees with me, yet he doesn’t realize it. Getting a college education today doesn’t guarantee you squat anymore, and it certainly won’t guarantee you anything 18 years from now. I even link to the post: What If You Go To Harvard And End Up A Nobody, yet the reader still thinks I only believe people who go to top rated universities get top rated jobs.

If I’m brutally honest with myself, what does this conflict mean? It means: 1) I write too much fluff, 2) confuse people, 3) don’t understand the trend of shorter attention spans, and 4) stubbornly think people like multiple layers in a post just because I do.

So what’s the solution? Write shorter, simpler posts that tell it like it is. Just like USA Today, dumb down posts to make them easier to understand. For example, instead of sharing stories explaining why so many people have miserably low 401k balances, just write something simple like, “People don’t save because life happens.” Bam! Time saved. Message conveyed. If I can’t get my point across, I’m failing.

Look, I know it’s easier to do nothing. But I challenge you to open up yourself to judgement and ridicule if you want to grow. Some people will be nicer than others when it comes time to evaluating what you’ve put out in the world. Others will project their insecurities onto you. Embrace the feedback and be brutally honest with yourself! It’s the best way to get better.

Feedback from readers has given me the green light to introduce posts that are short and simple. Being honest made me realize I’ve been spending too much time doing things that don’t matter. As someone who needs more time, these discoveries are a blessing.

Other benefits of being honest with yourself:

* You’ll stop blaming others for your problems and focus on improving yourself. As soon as you wipe away your delusion, you will become happier.

* You will get paid and promoted faster at work because you’ll more clearly recognize your blind spots. It’s hard for your colleagues and friends to be brutally honest with your deficiencies because they don’t want to hurt your feelings, get sued, or get murdered when you decide to go postal.

Dunning-Krueger And Your Delusional Self

Readers, what are some of the ways you’re putting yourself out there? What kinds of critical feedback have you received that helped make yourself a better person? Any more feedback for me to make FS better without spending more time? Thanks!

The post To Get Better, Be Brutally Honest With Yourself appeared first on Financial Samurai.