The Value Of A Property After Experiencing A Tragic Death

Posted on December 13, 2017 | Comments Off on The Value Of A Property After Experiencing A Tragic Death 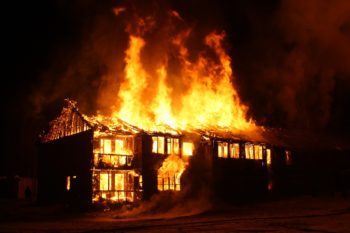 On one of my winter open house rounds I stumbled upon a beautifully renovated Edwardian with three bedrooms and two bathrooms on the top floor, a full bathroom on the first floor, and a bonus room on the bottom floor. It looked a lot like my rental house I sold this summer, but brand new.

Upon further investigation, however, I learned from the new listing agent there was a terrible fire back in September 2013, hence the gut remodel. That’s fine, so long as the new construction was done up to code. But then the listing agent went on to tell me there was not one, but three deaths as the result of the fire: a 33-year old father, his one year old daughter, and her grandfather.

As a new father, my heart sank to the deepest depths of the ocean. I could not imagine losing my son so early. My only wish for the Grim Reaper is that my son outlives both his mom and I, 25 years from now.

Buying A Property That Experienced A Tragedy

Even with a 20%+ discount to fair market value, I would never buy a home that experienced such tragedy. Call it superstition, but I would always wonder whether their ghosts would haunt us because we had taken over their home. Maybe the house is cursed and would consume all of us in the future as well with a new fire.

When the firefighters got there at 1:30am, they said all the fire alarms were blaring. I’d like to think that if I smelled fire and heard the alarms, I would have the calmness to wake up my wife, pick up my baby, and walk 20 feet out the door. Even if a fire was blocking my way, I’d walk through the flames protecting my little one knowing that short-term burns would be better than death. But such disasters often happen too quickly to react.

The only way I would ever consider buying a property with such a tragedy, even at a steep discount is if it was for a rental. In San Francisco, you have to disclose if there has been a death on the property within the past three years. The owners waited until the fourth year to list, which may or may not have been on purpose. But as a landlord, you don’t have to disclose, but you probably should just in case.

In the end, I decided even if the property was free I wouldn’t be willing to own the home. It would be like owning a dog that mauled to death three children. The constant association with such a tragedy would be too difficult to bear.

Other Types Of Deaths In A Property

Based on my research, it seems like the average discount to market for a tragic death on the property is somewhere between 15% – 25% in America. Tragic deaths include: homicide, suicide, death by fire, death by electrocution, death by falling.

For nontragic deaths, the discount is anywhere from 0% – 10%. Nontragic death is considered death by a natural cause e.g. old age, organ failure, disease.

If you are a home buyer, let me offer up a guide to how much of a discount you should argue for during negotiations if you are OK with buying a property that experienced a death. It’s always good to anchor low in the beginning and move towards the middle. 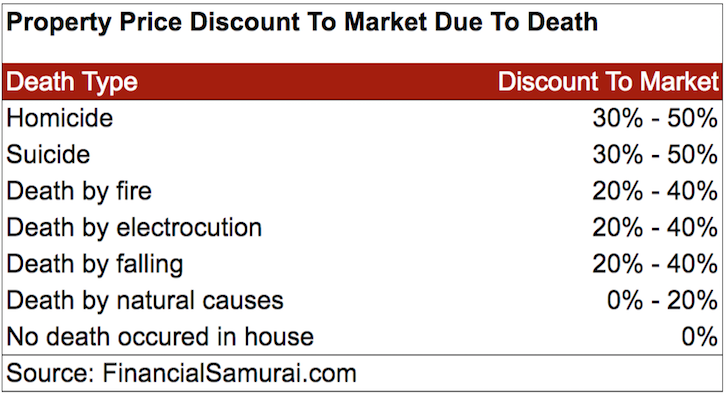 Now that I think of it, perhaps there’s an arbitrage opportunity for buying new construction homes in places that are extremely superstitious about home deaths or areas with a much older demographic. Surely there are plenty of people willing to pay a premium knowing they are the first and only person to create new memories in a new home.

Let’s embrace everyday as if it were our last.

Is there a certain percentage discount that would entice you to purchase a property? The house that was listed for sale in this post didn’t receive an offer at their offer due deadline.

Note: Thanks to reader feedback, I’ve created a Financial Samurai iTunes channel for those who enjoy listening. I’m still trying to figure out how to get the channel to list all the podcasts published. In the meantime, I’ve created a Financial Samurai Podcast page that has every single podcast I’ve published, including the links to the respective posts. Feels good to highlight a problem and take action.

The post The Value Of A Property After Experiencing A Tragic Death appeared first on Financial Samurai.