The Marriage Penalty Tax Has Been Abolished, Hooray!

Posted on February 16, 2018 | Comments Off on The Marriage Penalty Tax Has Been Abolished, Hooray!

In the past, I used to wonder why two individuals with high incomes or two individuals with a large income differences would ever want to get married. Paying thousands of dollars in marriage penalty taxes didn’t make sense. It seemed obvious that the government wanted one spouse to give up his or her career to stay at home, even if there were no children to raise.

In the eyes of the government, 1 + 1 literally only equaled 1.12. This is blatant anti-marriage discrimination. Discrimination is not OK even if you aren’t being discriminated against. Below are examples that demonstrate the marriage penalty tax that used to occur under the old tax structure. I used the Tax Policy Center Calculator.

Each person makes $200,000. They don’t own a home, and have two children. The results are the same if they have no children. They pay a whopping $15,162 marriage penalty tax. 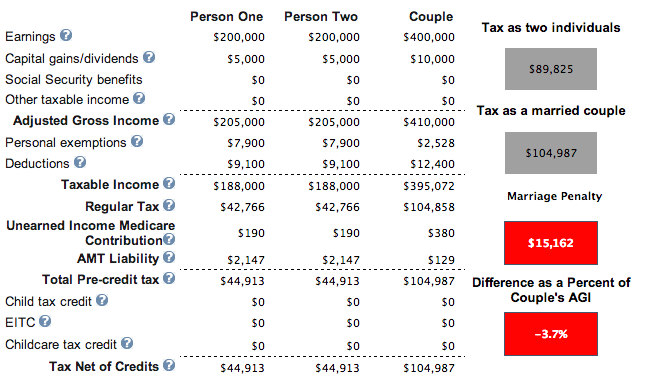 After 20 years, this person will have paid $270,000 more in taxes than if he or she had stayed single or unmarried. Marriage forced this person to pay an average of $13,434 more in taxes a year. Think about what this couple can do with all this money! 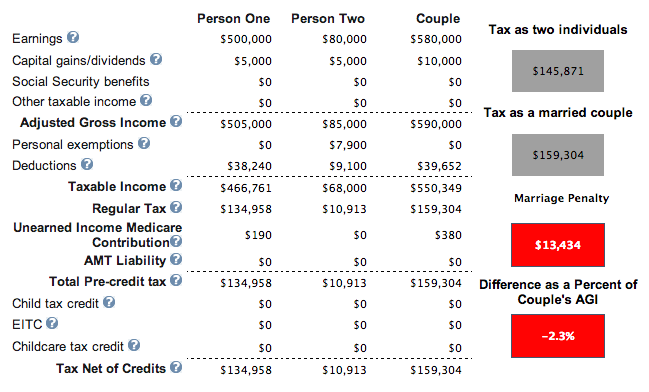 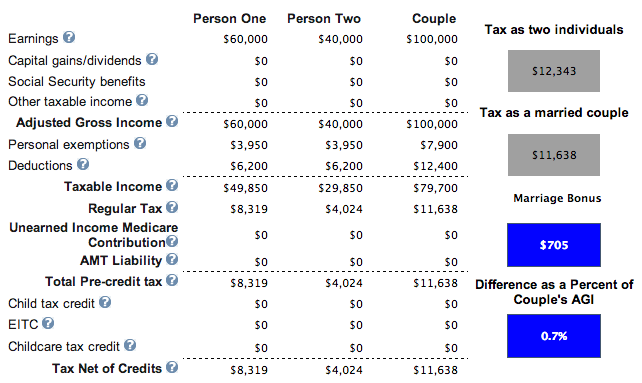 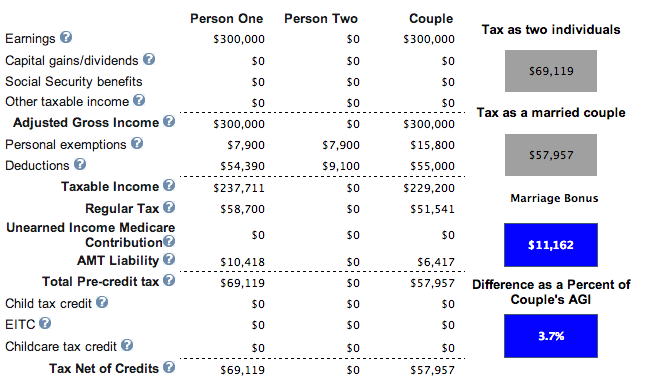 Based on the above examples, from a tax perspective it seems clear that you should only get married if your contemplated partner makes a similar level of income up to around $100,000 a year or you anticipate your spouse having zero income. If both of you made much more than $100,000 a year, you paid a marriage penalty tax.  How much you paid depended on the number of kids and deductions you had. And given most $100,000+ a year jobs are located in high cost of living cities where housing, education, and taxes are already high, paying a marriage penalty tax was infuriating.

With the passage of new tax reform for 2018 and beyond, the marriage penalty tax is now practically abolished. Based on the new federal income tax brackets below, there is tax EQUALITY up until $300,000 per person. In other words, two individuals who make $300,000 and get married for a combined income of $600,000 will pay roughly the same amount of tax (35% marginal tax rate) as if they were single. Not bad given in the past, they had to pay a 39.6% rate on any income above $470,701.

There are many income permutations to consider when calculating whether or not there is  a marriage penalty tax or bonus. However, the key math to consider is at the 10%, 12%, 22%, 24%, 32%, and 35% tax brackets – there is a logical doubling of income thresholds if individuals get married. Therefore, there is no tax penalty for any individual making up to $300,000 a year or married couple making up to $600,000 a year.

I no longer have to spend hours coming up with different married income permutations to figure out when tax penalties start hitting. I can just tell based on looking at the graph. Perhaps this is why the tax industry is so afraid of streamlining the tax system. When things are easier to understand, they lose business.

Almost Everyone Should Rejoice

Given we know that the top 1% income earner makes roughly $400,000 a year, it’s safe to say that less than 1% of Americans will still pay a marriage penalty tax. Therefore, if you’ve been holding off on getting married until the tax situation gets sorted out, now is the time! If the marriage penalty tax ever gets reinstated, you can always get a divorce.

The only clear financial benefit I see for getting married is Social Security survivor benefits. Under current law, if your spouse dies, you get to keep all the accrued benefits. If you are not legally married, then the government gets to keep all the taxes you’ve paid into the system if you have no children. Talk about a bad deal for the American people.

Since everyone believes in equality, everybody should be rejoicing at our new federal income tax rates. I personally believe that a married couple earning up to $315,000 after deductions is the ideal income for maximum happiness. You’re paying a 24% federal marginal income tax rate and can pretty much live a comfortable life anywhere in our great country.

Readers, why do you think people were willing to pay thousands of dollars in the past for the privilege of having a marriage certificate? Wouldn’t you rather save all that money to buy a house, pay down some debt, go on a great annual vacation, or invest? Is there an married income level that is paying a marriage penalty tax that I missed?

The post The Marriage Penalty Tax Has Been Abolished, Hooray! appeared first on Financial Samurai.