Posted on December 19, 2017 | Comments Off on The Biggest Financial Concerns Of Affluent Investors 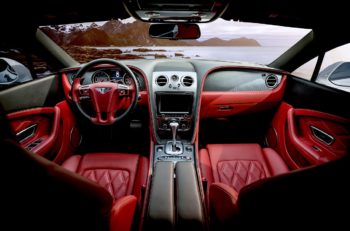 Personal Capital, a digital wealth advisor with over 1.5 million users of its free financial tools, released its 2017 Affluent Investor report with some interesting data. I used to consult with them between 2013 – 2015 and have been using their tools to track my net worth since 2012.

The biggest surprise from one of its surveys is that folks with more than $500,000 in investable assets are most worried about a financially secure retirement. Think about that for a minute. With the median retirement savings for 56 – 61 year olds in America at only ~$20,000, Americans with 25X that amount cite financially security as their top worry!

With $500,000+ in investable assets alone, one can presume that most survey respondents have net worths in excess of $1,000,000. After all, about ~85% of the typical American’s net worth is tied up in their primary residence. Check out the survey results. 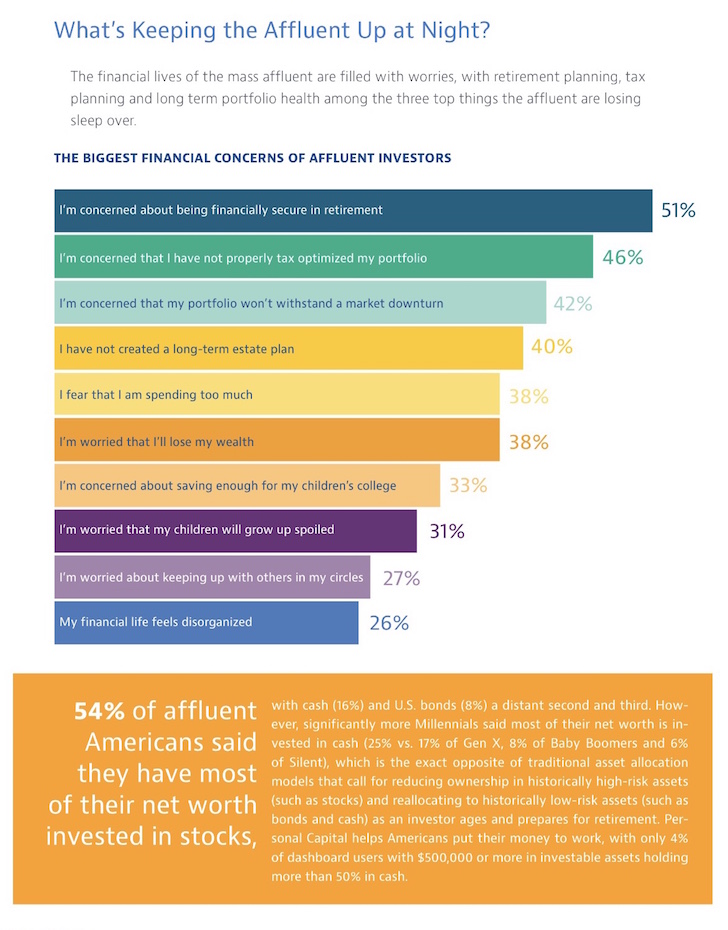 I bet most people in the world would consider having $500,000 in investable assets plus a paid off home to be a financial life well done. Therefore, we can conclude that affluent investors have to be one of the most paranoid demographics around, especially since 38% said they are also worried about losing their wealth.

Why Are Affluent Investors So Paranoid?

Most of the people who’ve been able to amass over $500,000 in investable assets are probably older than 37, the median age in America. Therefore, one can postulate that these investors have lived through the housing crisis and maybe even the 2000 dotcom bubble with a significant amount of assets. They’ve seen their investments get slashed by a third within 12 months a couple of times. They know dozens of people who were let go from a job they needed and remained jobless or underemployed for years.

When you amass $500,000+ in investable assets, you naturally start getting paranoid about losing all your money that took years, if not decades to accumulate. That paranoia only tends to get worse the more money you have in risk assets. After all, it takes a 100% return to get back to even if you lose 50% of your money.

Once I accumulated over $1,000,000 in investable assets, it no longer seemed prudent to allocate all my money towards stocks. Instead, I began piling most of my money into real estate to diversify away from my 401k, my company stock, and my career in equities. Little did I truly realize my “diversification,” starting in 2003, was actually a 5X leverage concentrated bet on San Francisco real estate.

The irony with having very little to invest is that you simply don’t have much financial worry. Think back to how happy you were in high school, college, or the first few years after work. All you cared about was having a good time and maybe saving a little money on the side for a vacation or a new ride. Is it any wonder why so many of use were happier before the age of 35?

It was only until after I built some passive income and started this site did my investing paranoia begin to wane. Writing about your fears is a lot like speaking to a therapist who helps put things into perspective.

1) Poor investment returns from my rental home proceeds. Although it’s been a relief to no longer manage a rental property that comes with a $23,000 a year annual tax bill, I know I’ll be disappointed with myself in 20 years when I revisit how cheap I sold it for. The only solution to minimizing disappointment is earning at least a 5% annual return on my proceeds that cause minimal worry. My hope is that RealtyShares, the stock market, and the municipal bond market will provide such an outcome, but I’ll never know for sure.

2) A large decline in my online business. My online business is the main reason why I’m not concerned about being financially secure in retirement . The income generated from the business is a buffer to the passive income that is currently enough to provide for my family. But as I look into the future, I’m thinking of taking things down a notch to spend more time with my son and minimize happiness downturns. Less effort generally means less reward unless I can increase productivity. The creation of the FS iTunes channel is one way for me to buy time during the weeks I no longer want to write. It’s potentially a new revenue generator as I’ve already been offered two sponsorship proposals.

3) The financial well-being of my in-laws. My parents are thankfully financially secure due to their long careers in the US Foreign Service. They lead frugal lives with no debt, minimal expenses and have healthcare and pensions. My in-laws, however, are not as lucky. They are surviving fine, but I want them to be thriving at their age. I want to find a way to financially help them without offending their honor. This is a tricky subject that deserves a dedicated post.

Try Not To Let Wealth Get In The Way Of Happiness

The amount of financial worry six figure income earners and high net worth individuals have is quite a paradox. But paranoia helps investors accumulate more capital in their lifetimes than those who couldn’t give two poops about financial freedom. However, investing FOMO never allows folks to ever be satisfied with how much they have.

The key to being financially happy when you’re already doing well is to compare your current self to your past self and not to other people. If you can focus on your own progress, dare I say your happiness meter might jump up a point or two!

The Fear Of Running Out Of Money In Retirement Is Overblown

Readers, what is your number one concern as an investor today? If you are an affluent investor, are you really concerned about financial security in retirement? If so, why when you have way more money than the average person?