Posted on December 7, 2017 | Comments Off on How To Invest In Speculative Investments Like Bitcoin Without Losing Your Shirt 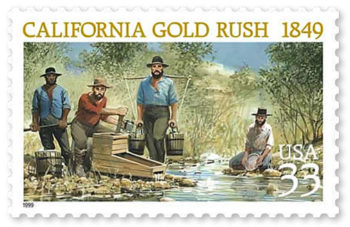 In late 1999 I had my Bitcoin moment. I was a 22 year old first year analyst working on the international trading floor at a major investment bank. The internet boom was peaking and I had just gotten my year end stub bonus of $20,000. Although the $20,000 magically turned into $12,000 after paying New York City taxes, for the first time in my life I no longer felt poor.

I took $3,000 of my bonus proceeds and invested in a company called Vertical Computer Systems Inc (VCSY). I didn’t know much about it. All I remember was that it was a China internet play with a telephone dial pad as its home page. I was on the Emerging Markets team and spent all my time looking at Asian and Eastern European plays. Surely, VCSY was going to be the next Yahoo!

The stock’s 6,000% move was ridiculous as everybody I knew on the Street started piling into the name. I eventually got out of the stock at around $156 a share, netting a cool $153,000.

Realizing VCSY was 95% luck and 5% being in the right place at the right time, I sat on the cash for a couple years, watching the NASDAQ implode before finally getting the guts to use all my after-tax proceeds to buy a $580,000 condo in San Francisco with a $464,000 mortgage in 2003.

In retrospect, I should have kept hunting for new VCSY’s every year. However, while my wealth continued to grow, I was too afraid to lose even small amounts of money. The dotcom crash had scarred my investing psyche because I personally knew many people who lost both their jobs and their paper fortunes. The subsequent housing bubble crash was even more devastating because so many more people were affected.

If only there was a system I could follow that would give me the confidence to consistently swing for the fences without losing my shirt.

Investing In Speculative Investments Without Losing Everything

What if there was a way to strike it rich without taking any risk? I never really thought about this possibility until a reader brought it up. Previously, I’ve always just allocated between 5% – 10% of my investable assets and swung for the fences.

Here’s what DoneAt53 wrote to another reader who is worried about current market valuations:

If the market tanks, you lost the interest on your money and very little of if any of the principle. If Mr. Market keeps going up, you get a nice percentage of the gain designed at your comfort level with (almost) none of the risk.

With your risk-free investment income, invest in the most speculative investments that have the potential to give you the highest returns. Even if you lose your entire investment, you will never go to the poor house because you will never lose principal.

* DoneAt53 discusses buying out-of-the-money options that provide higher returns on a specific stock or index versus buying the actual stock or index. The downside is that if your options expire out of the money, they are worthless.

* Cryptocurrencies like Bitcoin, Ethereum, and Litecoin are the hottest speculative investments at the moment and finally attracting mainstream capital. Bitcoin could easily collapse by 80% next week, but it could also continue to go up multiple times because of a surge in liquidity and world-wide adoption. You can by your slice of Bitcoin on an exchange like Coinbase.com. 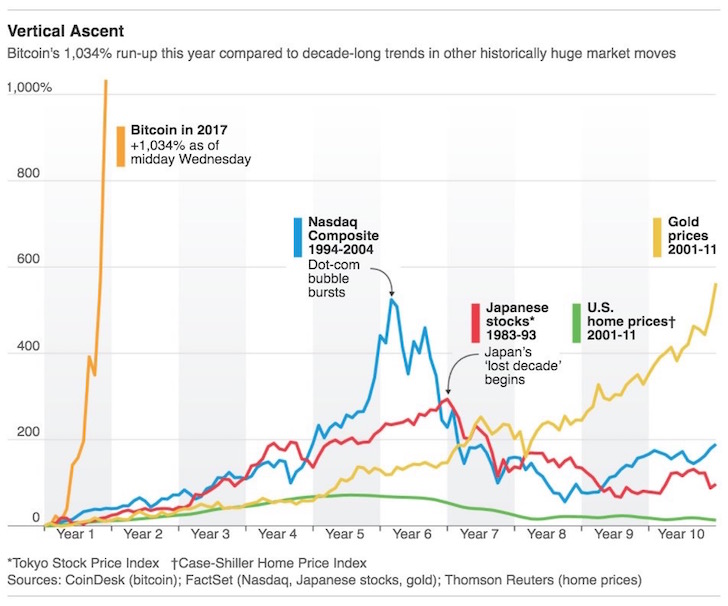 * Internet and tech stocks in emerging markets. Buying the Googles, Facebooks, Ubers, Apples, of XYZ emerging markets is a straightforward investment thesis. Buying the next “Yahoo of China” was my investment thesis in 1999 when I bought VCSY. I continued this thought process in 2013 when I wrote, Should I Buy Chinese Stocks? Sina, Baidu, and RenRen have all done really well since.

* Angel investing where you provide seed stage capital is another way to earn massive returns. The problem with angel investing is that companies often have a minimum of $25,000 – $100,000. That’s unaffordable for most people, especially if you need to make $25,000- $100,000 in risk-free income. I’m no longer angel investing partly because of bad experiences. But if the minimums come down, I might do so again.

* The crappiest small cap IPO that has gotten bludgeoned since going public for whatever reason. One example is Blue Apron that IPOed at $10 and fell all the way down to $2.97/share. I decided to pick $10,400 worth up at $3.15 a share. They found a new CEO, lowered guidance, and fired a bunch of people since. The bar is low now and the stock shot up to $4.15 at one point. I hope they get bought out.

Another example is Snapchat. It went IPO at $17, got foolishly hyped up to $27/share and then disappointed repeatedly in its quarterly results and fell to $12 a share. The problem with my SNAP purchase at $12.24 is that even at current levels, it’s still valued at $18 billion. It’s harder to move rapidly or get purchased for a large premium when the company is already huge.

The recent crap IPO I missed was Funko (FNKO), a maker of toys. They priced the stock at $12, gapped up to $19.93 and closed that week at $7, all before reporting results. Now the stock is up 40%. You’ve really got to pay attention if you want to capture such opportunities.

* Original works of art from unknown artists who you think have the potential to go mainstream. If they don’t go mainstream, at least you can enjoy the work.

The example has several assumptions that should be noted: 1) the low risk income is not required for survival, 2) rental income may or may not be considered low risk, 3) the time frame for the potential returns is unknown or up to the investor to decide, and 4) to deploy such a strategy, you must save aggressively and stop spending like a knucklehead, and 5) it’s up to you to figure out what else beyond CDs and muni bonds are considered low risk and invest accordingly. 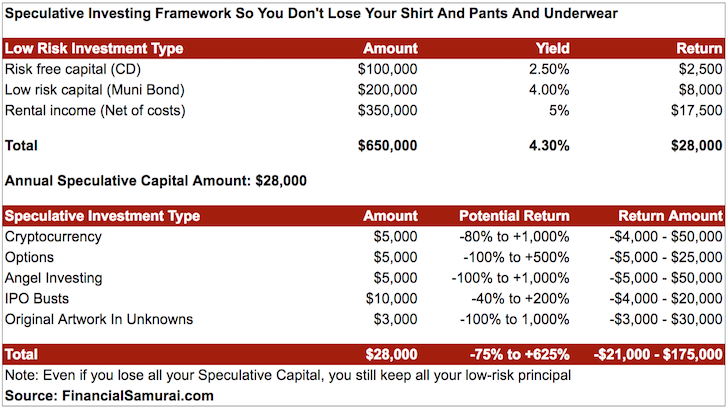 Even if this person loses his entire $28,000 of low risk income in speculative investments, he’ll be fine. The key is to not get carried away by cutting into principal, much like a gambler does when he pulls out his wallet or goes to the ATM machine for more cash.

Although earning a 16%+ return on your S&P 500 index fund in 2017 is excellent, it’s a relatively slow way to earn a fortune since the stock market averages around 8% – 9% a year long term. After all, one of my motto’s is achieving financial freedom sooner, rather than later.

If you want to get rich quicker, it’s worth carving out 5% – 10% of your investable assets and/or reinvesting your risk-free income into speculative investments that complement your plain vanilla investments each year. Just make sure your risk capital is capital you can afford to lose, because you will lose quite often. Also make sure you have a comfortable cash buffer to provide for you and your family in case Armageddon strikes again.

Because I hate losing money, I decided to invest time in my 30s building a lifestyle business. I figured worst case, I’d become a better communicator and learn something about the online publishing world. I knew I would not regret putting in an extra effort while I still had the energy.

My problem now is that at age 40 I’ve hit an inflection point where time is much more valuable than money. The desire for more time is why I’m happily farming out my capital to people who want to spend their careers looking at investments. It’s the same reason why I’m highly amenable to hiring a property manager the next time my tenants give me hell.

If you are lucky enough to strike it rich with a speculative investment, do your best to turn the funny money into a real asset that generates stable cash flow. If not, use some or all of your lucky winnings to pay for a better life.

Barring a natural disaster, the $580,000 property I bought in 2003 with my VCSY money will still be there generating $4,000+/month in rent forever. And if not, maybe I’ll make it into the Financial Samurai office or have my parents or sister live in it for free one day.

Remember: You only need to get rich once! Turn your lucky break into a gift that keeps on giving.

Related: Investment Ideas At The Top Of The Market

Readers, how much of your capital do you allocate to highly speculative investments? Do you have any big wins? If so, how did you spend or reinvest the proceeds? Note: On 9/25/2017, a condo unit next to mine with a similar layout sold for $1,360,000.

The post How To Invest In Speculative Investments Like Bitcoin Without Losing Your Shirt appeared first on Financial Samurai.