How To Get Financial Aid Making Multiple Six Figures A Year

Posted on December 4, 2017 | Comments Off on How To Get Financial Aid Making Multiple Six Figures A Year 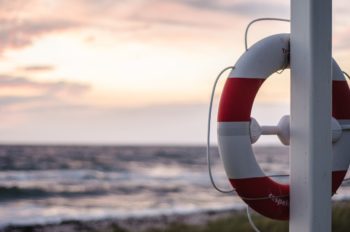 Despite earning a six figure household income, many parents struggle to pay for their children’s education without going into debt. This post highlights how you can qualify for tuition assistance despite making $200,000, $300,000, $400,000, or even $500,000 a year.

I was talking to a parent of four who used to send his kids to a private grade school K-8 about the makeup of families who pay $30,000+/year in tuition per child. I cherished my time growing up in Africa and Asia up until middle school and enjoyed my experience attending a public high school in Virginia. To have my son attend a homogenous school where everybody looked the same and came from similar economic backgrounds would be a shame.

The dad mentioned the school tried to diversify its student body through financial aid. When I asked how the school determined which families got financial aid, he said something surprising.

“Households qualify for financial aid if they don’t make at least $100,000 a year per child.”

In other words, if you have four children, you qualify for financial aid if you make $390,000 a year. Financial aid consists of low interest rate loans, but mostly free grant money. I thought this was a high threshold because $390,000 is right around the top 1% income level in the country.

Nobody needs to send their kids to private school given every child can go to public school for free. Further, I’m not sure if too many folks decide to have four children if they can’t afford to raise them. Sure, one or two children may be unplanned. But having four is definitely intentional.

Because the dad and mom could not afford to continue paying $120,000 a year in after-tax tuition for their kids, they moved their family to the suburbs to attend free public school. Ah hah, at least they decided to take action instead of complain why life was so hard making $500,000 a year!

Despite finding a solution, the dad seemed a little bitter about not being able to get financial aid for his kids because he asked me the following,

“Is it better to provide financial assistance to underrepresented minorities and lower income households whose kids have a much higher probability of dropping out after several years at the school because they don’t have enough parental support? Or is it more worthwhile to help families like mine who make just over $100,000 a kid, but whose kids will likely graduate from school?”

His argument was that social engineering in private school wasn’t working, just like how the lottery system for public schools in San Francisco is arbitrary and a waste of property tax dollars. In San Francisco, living in a neighborhood where you want your kids to go to school gives you no edge.

Part of every private school’s wish is for as many of its students as possible to graduate so the school can score higher marks when rated. The higher the marks, the greater the school´s demand, prestige, and tuition revenue. Further, the more successful the graduate, the higher the donation rate, which over time has grown in importance.

I still believe trying to diversify the student body to better reflect the makeup of the city is a more worthwhile goal than trying to help families who make just over $100,000 a kid, but who all look the same. Diversity is worth it because the real world is diverse. If you spend your entire life in an un-diverse bubble, you will have a tougher time getting ahead.

Before taking out the pitchforks, let’s take a look at why this $500,000/year family could no longer afford sending their four kids to private school. A recent divorce might also have something to do with it. 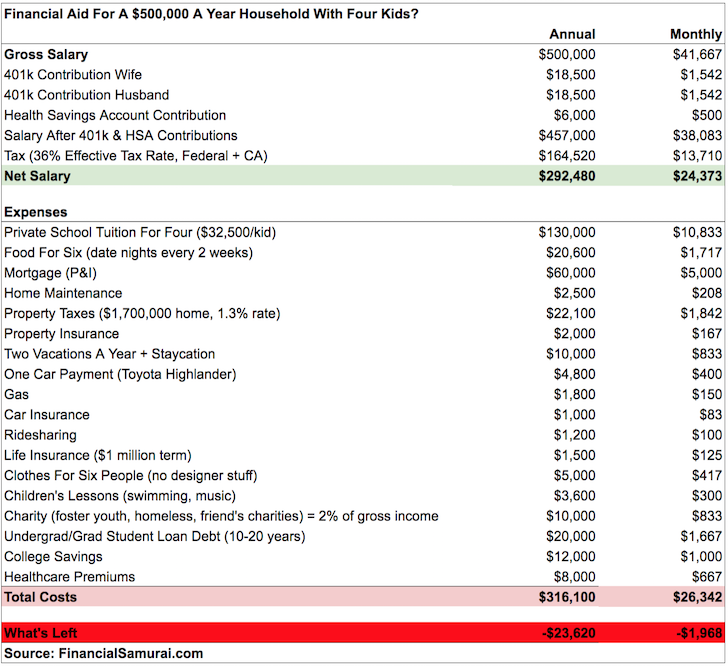 Based on a 36% effective tax rate, the couple needs to earn $203,125 a year just to cover the cost of private school tuition for four kids. What I haven’t included are the additional givings every family is pressured to offer each year.

I’ve gone through the budget in detail, and there is very little left to cut, except for contributing less to their respective 401ks for 2018, taking one less vacation a year, and donating less than 2% of their gross income to charity.

Even if they donated $0 to charity and spent $0 on vacation, they’d still be $3,620 a year in the hole without lowering their 401k pre-tax contributions.

The problem with this family is that they are not accumulating any liquid savings to pay for any emergency expenses. With six people in the household, something always comes up. In other words, this family was scraping by on $500,000 a year and now has $130,000+ of breathing room by sending their kids to public school.

If this family is ~$23,620 in the hole each year on a $500,000 household income, then a family making only $390,000 a year is certainly going to be hemorrhaging money if they send their four kids to private school. Let’s take a look at their budget.

Why A $390,000 Household Qualifies For Financial Aid

As you can see from the chart above, even after lowering the student loan debt, donating less to charity, spending less on vacations, and lowering their effective tax rate by 4%, this household is $70,440 in the red every year. From a school administrator’s point of view, financial aid is warranted.

Kids Are As Expensive As You Want Them To Be

A quality education is becoming the biggest contention point between the rich and poor. I know many ultra wealthy parents who donate heavily to every level of education to increase their child’s chances of getting in. And then there is a whole swath of multiple six figure income parents who feel downright middle class because they can’t get any assistance.

The great thing about the internet is that it makes knowledge accumulation free. And when something can be obtained for free, the value of anything that requires payment declines.

For those who like to plan, it’s good to realize the $100,000 income per child threshold for financial aid is becoming more common among private grade school and universities today.

If you’re making $199,000 a year and have two kids, it might not be worth the extra hours and stress to make $50,000 more. And if you have kids under five, it’s probably best to spend as much time with them as possible anyway.

At the same time, if you’re making $380,000 a year and are considering adopting a fourth child, knowing you’ll be eligible for tuition assistance may make helping a little one easier.

How To Make Six Figures At Almost Any Age

Career Or Family? Data Says You Only Need To Max Sacrifice For Five Years

Readers, what are your thoughts about being eligible for financial aid when earning multiple six figures a year? Should financial aid be focused more on underrepresented minorities and lower income families instead? What do you think the right income per kid threshold is when financial aid kicks in? Should the government do more to subsidize parents who decide to have a lot of kids?

The post How To Get Financial Aid Making Multiple Six Figures A Year appeared first on Financial Samurai.