Develop Your Sphere Of Influence To Achieve Financial Independence

Posted on September 28, 2017 | Comments Off on Develop Your Sphere Of Influence To Achieve Financial Independence

My first understanding of the power of influence came as a 21 year old at 1 New York Plaza, New York City. During a job interview with a sales trader at Goldman Sachs, I remember him telling me the most frustrating thing about his job was that as soon as GS showed up in the queue to buy, the stock would instantly move higher.

His job was to buy stock for an institutional client at the lowest price possible. But because GS was the most powerful investment bank at the time (perhaps still is), other traders would instantly try and front-run a GS order.

The thinking always went like this: If GS is selling, we should probably sell as quickly as possible because they probably know something we don’t know and vice versa.

Due to the constant front-running, algorithmic trading and dark pools were created to obfuscate large buyers and sellers. When there was simply too much stock a fund wanted to offload, an investment bank would act as a principal, buying the stock at a discount in hopes of selling off the stock to other clients at a lower discount. With enough discretion, taking such risk often paid off. But sometimes, the bank would get slaughtered due to loose lips.

The Power Of Influence

Nowadays, the most common example of influence lies in an announcement that XYZ famous investor took a stake in ABC stock. For example, whenever Warren Buffet says he bought something, you can be sure the stock will jump several percentage points. The only way you can really get an edge is to buy Berkshire Hathaway stock.

None of us will ever be as influential as Warren Buffet, but over time, we can all develop our own sphere of influence.

The easiest way to develop influence is do something and succeed over and over again.

For example, after you’ve done 1,000 successful eye surgeries, you will become the leading eye surgeon in the land. You will be invited to conferences, be able to direct research funding, and receive a steady stream of clients. Your influence will enable you to raise prices, create courses, license your name, and get rich in the process.

If you’ve done 25 surgeries, and botched five of them, nobody will ever want to see or hear from you again.

Influence Can Come From The Smallest Idea

Although a lot of folks from all over come to Financial Samurai to learn more about personal finance, this site is really tiny in the grand scheme of things. I don’t expect to influence the world, especially since I’m an unemployed nobody.

I only expect to help the 3% of you who actually take my advice. That’s right. Based on conversion metrics, roughly 97% of you read something and never take action. That’s cool, because it just means something isn’t painful enough for you to do something about it.

To my surprise, over the past several months, more than half of the experienced real estate agents have told me the western side of SF is the best place to buy. They pointed to Inner Sunset, Parkside, and Golden Gate Heights as the primo neighborhoods to make the most amount of money.

Several even listed reasons why Golden Gate Heights is the best area which sounded eerily similar to the reasons given in my post published in 2014 called, “The Best Place To Buy Property In San Francisco Today.”

Then one realtor handed me a flier with this chart below. It’s Redfin’s 10 hottest neighborhoods in the ENTIRE country to close out the year 2017. Notice anything funny? 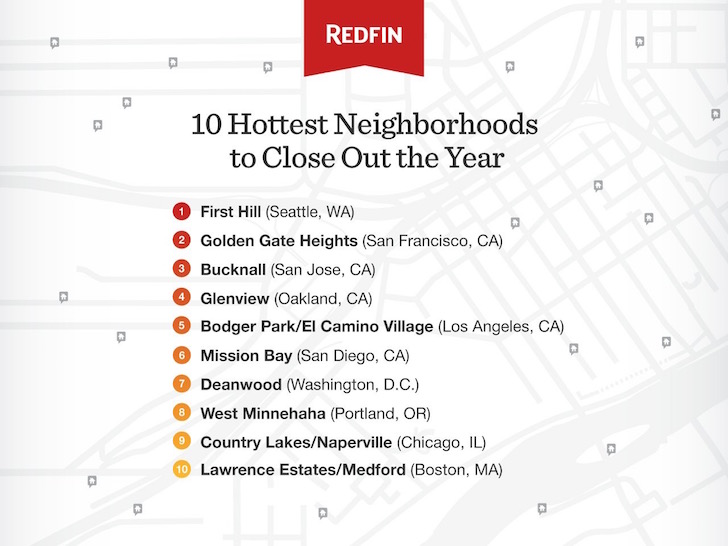 When I Googled,”the best place to buy property in San Francisco,” I found my article in the #1 or #2 spot of the results. So I asked all the realtors whether they had heard of Financial Samurai before, and all of them said yes.

Ah hah! It’s seems that three years after I made a strong argument for Golden Gate Heights, Google now agrees with the argument, many realtors now agree with my thesis, public company Redfin agrees, and now a herd of new buyers agree.

In fact, just the other day, our local paper republished a post originally published on Business Insider about Golden Gate Heights. 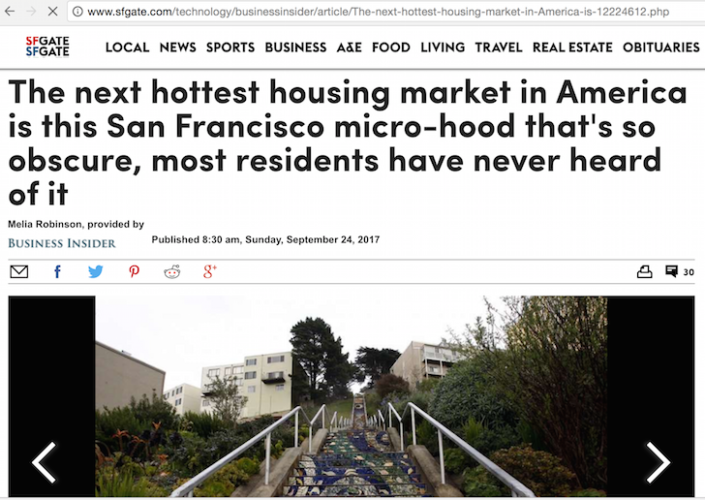 Who said the only way to make money blogging is through online advertising? My biggest mistake was not buying two GGH properties before the mass media and real estate companies decided to agree.

Will they give me credit for the thesis I made in 2014 they are now claiming as their own? Of course not. But it doesn’t matter because what I care most about are the results. The author of the Business Insider article graduated in 2013 and came to SF in 2015. So from her perspective, GGH is an incredible revelation.

The most important place to grow your sphere of influence is at work. Do what you say you will do in a professional manner for a long enough time and you will get paid and promoted.

Once you’ve developed a solid track record at work, develop influence with your clients and competitors. If your clients all believe in you, then you can go anywhere and your clients will follow. The more you are respected and feared by your competitors, the more they will want to poach you for bigger bucks and a larger role.

To really scale your influence, establish a presence online. Compared to offline reach, online reach is unlimited. I could have tried to meet every single realtor in San Francisco to make my Golden Gate Heights pitch in person, but that would have taken forever and expended too much energy. Instead, I simply spent a few hours typing a post, then let the internet do its thing.

Once you develop influence you can scale your influence into any number of things:

With so many new ways to make money beyond your day job, your financial worries should decrease, if not disappear altogether. Achieving financial independence is only a matter of time.

* Influence must be earned through repetitive successful outcomes.

* You will only gain influence if you do what you say you will do.

* Providing an opinion when you have no skin in the game is pointless.

* The stronger your brand, the longer you can make your influence last.

* Once you gain influence, you can leverage your influence in many different directions.

* You’re only as relevant as your last result.

* You can skip the long slog of developing your influence by joining a firm that already has influence. However, you might always feel like an impostor piggy backing off your firm’s reputation.

When To Sell Real Estate: Every Indicator To Consider

For A Better Life, Be The One Percent In Something, Anything

How To Build Passive Income For Financial Independence

The post Develop Your Sphere Of Influence To Achieve Financial Independence appeared first on Financial Samurai.